In this article, we’re going to look at 10 of the biggest diet and exercise myths of all time.

And don’t worry if you’ve fallen for one of these yourself – I’m not calling you out. It happens to the best of us.

Instead, my intention is to dispel these diet and exercise myths so you avoid future pitfalls, get the results you want, and have more confidence in the decisions you’re making to boost your health, fitness and body shape.

It’s probably not the first time you’ve been told or read you should ‘avoid carbs’ if you want to lose weight. The internet is littered with articles that stress the importance of ‘avoiding carbs after 6pm’ and describing how ‘carbs make you fat’.

Well, carbs have a bad rep. Carbs are not the enemy – here’s why.

First, let’s look at how you lose weight. All successful weight loss diets share one thing in common:

They create a ‘calorie deficit’.

If you eat less calories than your body needs, your body has no choice but to burn its stored energy for fuel, aka fat. This leads to weight loss.

Most of the time, it doesn’t matter whether you follow a high-carb diet or a low-carb diet. As long as you successfully create a calorie deficit, you will lose weight. Fact.

That said, there are some things to consider when eating carbs.

Carbs can lead to weight gain, but not necessarily fat gain. You’ll only gain fat if you eat too many calories. If you’re in a calorie deficit but notice the scales go up, it’s likely to be water weight.

For every carb you eat, your body holds onto 2-3g of water. So the weight gain on the scales is water, not fat. The other reason for an increase in weight is usually down to increased glycogen, which are carbohydrates stored in your muscles as fuel.

Weight fluctuations throughout the week are frequent, and just because you gain weight it doesn’t mean the weight you’ve gained is body fat.

Instead of letting the scales dictate your mood, focus on the factors you can control, such as creating a calorie deficit and being consistent. If you follow this path, weight loss is guaranteed.

Side Note: Low carb diets and carb cycling can be beneficial, especially if you have a lot of weight to lose, or are at risk of developing type 2 diabetes There’s nothing wrong with going low carb, but don’t think you can’t ever have carbs again because that’s just not true.

Remember: Carbs do not make you fat, eating too many calories does.

According to BBC News, it’s estimated that 8.5 million people in the UK have now gone ‘gluten free’. I remember going through a gluten-free dessert phase, where I would go to the ‘gluten-free section’ at the supermarket and pick up a bunch of tasty treats.

I remember once buying some gluten-free cookies and angel slices. They tasted great, but I was shocked to see the calories were just as high as standard cakes.

Gluten cannot be broken down efficiently by the body, and 1-100 people have coeliac disease (an autoimmune disease) where the body has a severe reaction to gluten. So cutting out gluten isn’t a bad thing, but just because you eat gluten-free desserts, it doesn’t mean they’re healthier.

For example, from a weight-loss perspective (and presuming you don’t have coeliac disease), what do you think would be more conducive towards achieving your weight loss goal..

Hopefully, if you read the first point in this article, you’ll realise that it’s calories that matter the most when it comes to weight loss, and that the lower-calorie brownie would be a better choice.

Though, probably, no brownie would be a little better.

Just kidding. Eat whatever you like, as long as you’re in that calorie deficit.

There’s nothing wrong with ‘gluten-free’ desserts, but be sure to check the calories and ingredients before buying.

Myth #3: The power of ‘fat-burning’ foods

Wouldn’t it be nice to go to a supermarket, pick up 20 fat-burning foods and then wake up the next day a stone lighter?

Spoiler: there’s no such thing as fat-burning food.

As we learnt at the start of this article, weight loss comes down to calories in vs calories out.

That said, some foods can be more beneficial when trying to lose weight. For example, protein-rich foods such as steak, chicken, and eggs are called ‘thermogenic foods‘, which means your body has to burn extra calories to break them down. Other thermogenic foods include:

If you combine a calorie deficit with thermogenic foods, you’re onto a winner.

You’ve eaten well all week, tracked your calories, trained at the gym five days in a row and you hop on the scales feeling optimistic. You’ve already imagined the numbers showing a net loss of 2-3lbs.

But you look down, and you’ve gained 2lbs.

You’ve done everything you’re supposed to do but you’ve gone backwards – how is this fair? It can leave you feeling deflated, frustrated, and wanting to throw in the towel.

The truth is your weight will fluctuate. Weight gain does not mean fat gain. Your body is composed of three main components: fat, lean body mass (muscle, bone, and organs), and water (60% of body weight).

There will be days when your body holds onto more water, for example, through hormonal changes with your body, such as the menstrual cycle for women. Nicholas Screeton, a body transformation coach at Lep Fitness, says it’s not uncommon for women to gain ‘up to 8-12lbs during a menstrual cycle’. It’s often only water weight and will disappear as quickly as it appears.

Myth#5: You need to eat protein straight after your workout

You’ve finished your weights workout and get chatting to your friend for 10 minutes. But then you panic because you’ve not had your protein shake.

There’s a myth, that still goes around the gyms today, that you need a protein shake straight after your workout. It’s false.

There’s no doubt that protein is a crucial ingredient for changing your body shape and speeding up recovery between workouts. That said, don’t worry too much about the post-workout window, but rather the bigger picture, i.e. what you eat over 24 hours.

And, for the record, if you do like a protein shake post-workout, there’s nothing wrong with this, but don’t stress on the rare occasions when you’ve left your shake at home, or have run out of protein powder. 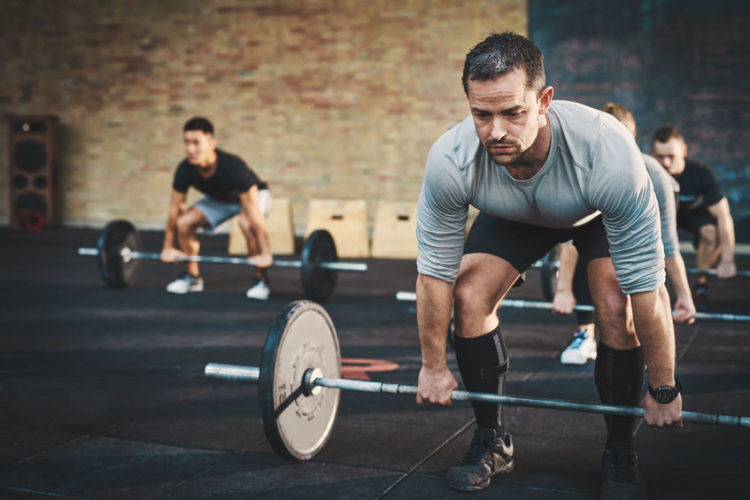 Thankfully there’s been a significant shift in the health and fitness industry over the last ten years. It used to be that guys lift heavy weights, and women jump around in lycra, do side leg lifts, and lift light weights for high reps.

What a load of BS.

We know that lifting weights doesn’t mean you’ll get bulky muscles. Yes, lifting heavy weights can have this impact, but 99.9% of people needn’t worry about this. Building bulky muscles doesn’t happen overnight – you have to have been training for a long time (often years), and be eating a ton of food.

Don’t fear that lifting weights will make you bulky. It’s usually the opposite – you’ll get leaner and more toned. Weight training is one of the best (arguably ‘the’ best) things you can do to transform your body shape and improve all components of fitness, from muscle tone, stamina, and mobility.

Yes, cardio is a great thing to do. A good cardio session can burn a whopping number of calories, improve your fitness, and leave you feeling elated from the surge of endorphins you get post-workout.

Cardio is important, but to say ‘cardio is the best for weight loss’ isn’t accurate.

Let’s go back to weight training.

You might not burn as many calories in weight training sessions, but the more muscle you can build, the more calories you’ll burn over 24 hours.

For the best results, it’s good to combine a mixture of resistance training with cardio. For example:

The above is just an example. You can do fewer days per week or incorporate cardio at the beginning or end of your workouts.

Myth #8: Ab exercises can get you ripped abs

Imagine if you could do 100 sit-ups per day for the next 30 days and notice a bunch of stomach flab disappears – wouldn’t that be awesome?

But the reality is you could do 1,000 sit-ups per day for the next year (not advised!) and still not have a flat midsection.

Ab exercises are essential. A strong core will support your lower back and prevent injury.

That said, most people spend too long training abs thinking they’ll lose fat solely from their stomach. I’m afraid that following celeb ab workouts from magazines isn’t going to give you the most bang for your buck.

Instead of doing thirty different plank variations, and hundreds of crunches, you’d be better off focusing on compound exercises that burn lots of calories and build large muscle groups. For example:

The exercises above (done correctly) will naturally work your core and have a more significant impact on helping you to get a leaner midsection.

If you like, you can still throw in some specific core exercises either at the beginning or end of your workout, but spending more than 5-10 mins on specific ab work is often not the most optimal way to spend your time in the gym.

Myth #9: You have to suffer to lose weight 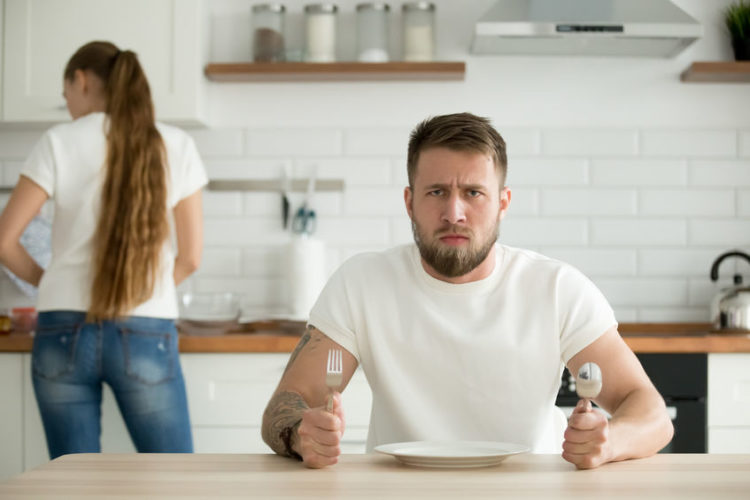 You see it in gyms all of the time:

People are pounding treadmills, sweating buckets, and making all sorts of grunting noises. There’s the famous saying ‘no pain, no gain’ – often interpreted as pushing yourself to the limit during every workout.

You don’t need to suffer in order to lose weight.

If all you were to do is create a calorie deficit and increase your daily steps, and you did that for the next three months, you would lose lots of weight. Yes, really – you can lose weight without making yourself throw up.

The more aggressive you go with both your diet and exercise, the more you will suffer. For example, most people will go from doing zero or little exercise to doing 5-7 workouts per week.

They will also go from eating and drinking anything they like (and usually in high quantities) to then living off chicken salads and less than half of their regular daily calories.

This is a recipe for failure and suffering, but it doesn’t have to be this way. You can still create a calorie deficit, but a smaller and more sustainable one (100-200 calories) per day and do it over a more extended period.

The quicker you want results, the more you’ll have to suffer, and the more likely you’ll be to fall off track. If you starve your body and go too aggressive with your diet and exercise, you will likely run into trouble. How many times have you tried an extreme diet, to later fall off the bandwagon and binge?

Remember, weight loss is a marathon, not a sprint.

Myth #10: The more you train, the better the result 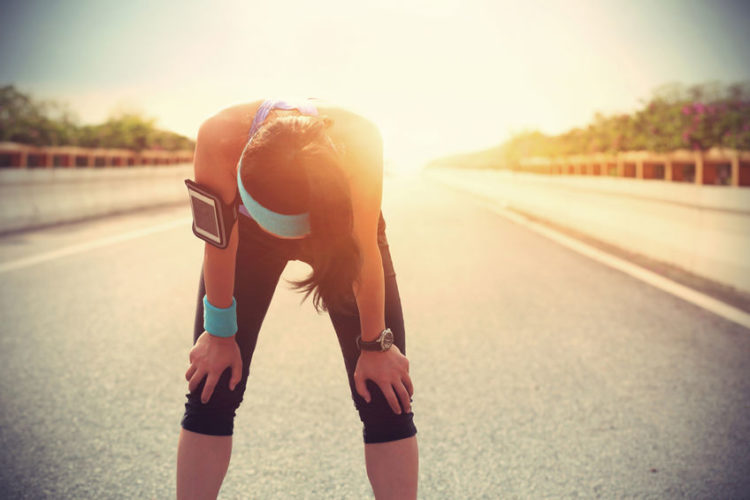 This is not entirely true when it comes to working out. Your training results and progress will all depend on how quickly you recover. Trying to train at 100% effort and every single day is a recipe for disaster, fatigue, and injury.

Rather than looking at frequency alone, it’s important to assess the following:

Recovery: are you fresh for each workout, or are you going into each session tired, sore, and fatigued? If so, read these seven easy tips that will speed up your recovery.

Performance: are you getting stronger, fitter, improving your reps, speed and time?

It’s not so much about quantity but quality. Once you’ve assessed those things, you can then make the right decisions about how often you train.

Your feedback is highly appreciated. Thank you. Cancel reply

This site uses Akismet to reduce spam. Learn how your comment data is processed.